The following profile of Jane Wingate is posted with permission from Foster's Daily Democrat. Written by Ryan Alan, it ran on March 26, 2006 as a front-page feature in the Arts & Leisure section of Foster's Sunday Citizen. 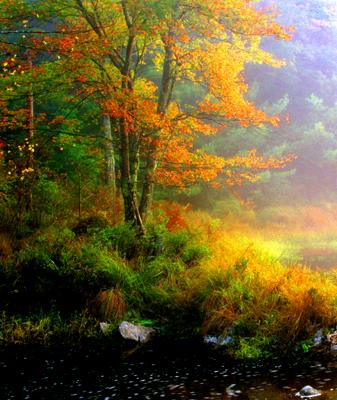 Life through a lens

It isn't necessarily about nostalgia when Farmington's Jane Wingate says she is glad she had her apprenticeship in the almost-gone era of film photography.

There was no better way to learn about the art and the craft than by lugging cameras and their heavy lenses and tripod, slogging through woods and bogs, explained the freelance photographer and writer.

That process is slow, she said, providing ample time to mull over how you want to shoot your subject, while learning how to master your gear.

It is twofold, she added: art and mechanics.

You have to know your gear and how far you can push, Wingate said, and you have to possess a good eye for ever changing light, and learn how the light you see will translate to film.

And then there is the entire matter of composition, she reminded, an essential element of most good photos.

"It is easy to get a camera and learn how to use it; producing an ever improving body of work with the tools is more challenging," she said.

The prolific, spirited artist long ago proved she was more than up to the challenge.

Her work, hanging in corporate offices and private homes and found on her collection of photo CDs, is testament to that.

Wingate said that she probably was attracted to photography before she was born, though she did not get her first camera until she was 10.

Her father helped pay his way through medical school with photography. Her mother, she recalled, was a fair painter and musician, a lover of the arts, sensitive to beauty.

"But with five kids and husband to cook for, the house and my father's medical offices to clean, and my father's bookkeeping to do, she didn't have the opportunity to develop her talents," she said.

Wingate, a native of the Boston suburb of Watertown, Mass., has spent a lifetime honing hers. (Politely ask her age and she offers: "Young enough to be still breathing and walking.")

The first photographer whose work made her say to herself, "I want to take photos like that," was the late pioneering Eliot Porter, considered one of the most important and influential of his time, and once called the "grandfather of color landscape photography."

"It opened my eyes, and I suppose it was his intimate landscape photographs that at one point strongly influenced my own work," she explained.

Certainly, his philosophy, which she shares on her web site (www.janewingate.com), has made a significant impact.

Said Porter, ". . . The rare photograph, the work of art, is the conscious product of personality, the expression of individuality, of vision and understanding of truth. But before all else a work of art is the creation of love, love for the subject first and for the medium second. Love is the fundamental necessity underlying the need to create, underlying the emotion that gives it form, and from which grows the finished product that is presented to the world."

Wingate implied that her artistic motivation might be difficult to articulate. But sometimes when she is shooting, she recalls what late photographer Todd Webb (often referred to as "an historian with a camera") said when asked how he wanted to be remembered: "He was a guy who just had to take photographs."

A writer once described Wingate as, "A woman with a camera forever glued to her face," who prefers "life through a lens."

People probably think of her landscapes first, or her candid portraits, she said. "But I shoot anything and everything that catches my eye," she said.

She said she is drawn to whatever looks interesting or beautiful to her.

She loves to shoot in junkyards, she wrote in a photo essay in "Rangefinder," the photography trade publication of which she is a contributing editor.

"A stroll through a junkyard inspires ruminations about what those cast-off vehicles may have witnessed," she wrote in the magazine.

Today, she elaborates, "Junk is beautiful."

Wingate considers writing her "other art."

"The photographer is only half of me," she said. "The other half is the writer. Both 'careers' have been equally important and enhance one another."

Her early writings were efforts at children's books.

"I'm a political junkie, which is the worst possible thing an artist can be. An artist can be easily waylaid into enterprises that sap the creative energies, though someone once said that any writer who does not use his gift to speak out on politics is not using that gift to 'good' use. It is an interesting debate."

She found she had a flair for the essay, so for a while published many op-ed pieces in publications like the Washington Post, Baltimore Sun and other outlets.

She also has penned novels and a screenplay, but said she did not make much effort to market them.

"When I got the photography up to the same speed as the writing, I slid into a photo-essay phase, combining the two arts," she said.

She prefers to let her writing and photography reveal her interests. "My photographs speak for themselves and my writing articulates my thoughts," Wingate said.

Wingate has photographed throughout the world — many images are captured on the photo CDs she sells through her website.

"Still, most of my photos are taken right here in New Hampshire, in my larger back yard. As a writer and a photographer, I guess sense of place is in a way doubly strong for me."

She conveys that well says Bill Hurter, editor of Rangefinder.

"Jane's photography also has that same simple directness as her writing," Hurter said. "At first glance, her images look postcard pretty, but on closer inspection one sees they are thoughtfully designed and articulated flawlessly on film or digital media. Her combined efforts convey a deep love of New England and despite her grousing about early winters and snow drifts, I know she could never live anywhere else."

In one Rangefinder photo essay, entitled "Reprising Winter," she wrote, "We who tough it out can choose between cooping up and huddling under afghans, or bundling up and getting out and enjoying winter's stark beauty."

She currently is working on some longer essays, reviving some pieces about growing up. Her photo essay on the Rochester Fair is slated for the September issue of New Hampshire Magazine.

She is running a series of raffles of her photos to raise money for the Farmington Interfaith Food Pantry.

She is considering a children's photo essay for a CD. Her ambitious CD study of Farmington, "Our Town Today, Volume 1," which her husband programed as a slide show, running on browser software used to read e-mail, offers 1,500 images.

Wingate, appreciating early on the possibilities for sharing her creativity, said she was the first Farmington resident to go online in 1995.

She has operated her Live Free or Die cyber store there (CafePress.com), offering her art on wearable and other items.

Everyone who sees "Live Free or Die" finds it amusing, she said. "It may be of special interest to us New Hampshire folk, because the motto is bred in our bones," she notes on her website.

Several years ago, her "Live Free or Die" image was chosen for the Currier Gallery of Art's annual show in Manchester of the best of New Hampshire.

Her latest photography CD, "Caribbean Cantata," which has a whopping 2,640 images of this memorable piece of geography, can be ordered through her website.

"I've seen a lot of photos of Jamaica, but not like these," one purchaser wrote. "Jane Wingate has a real eye; she sees (and captures) things I never have seen."

Wingate does not believe that everyone has equal capacity to "see" things the way artists do.

"That's what separates the artists out from their fellow men," she said. "They are obsessed with 'seeing' things."

She is philosophical about the impact of her work.

"I just take photos and put them out there," Wingate said, "or put them nowhere beyond my workshop. At one time, I might have been hungry to hear people praise my work, but I'm not anymore. I just take photos and write. To paraphrase Peter Schickele, if someone thinks my work is good in their eyes, then I guess it is 'good.' "